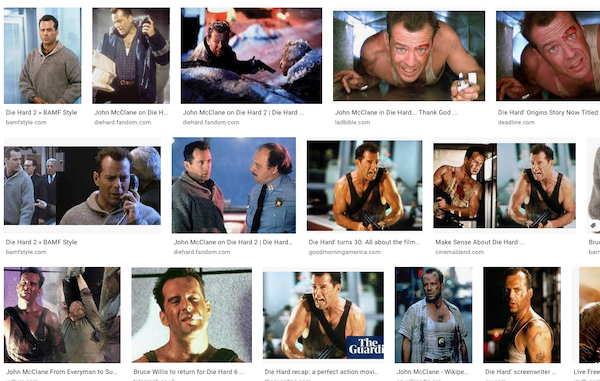 I talked here about ADHD and my airport analogy with Die Hard II being the epitome of the typical ADHD'er's day.

Expanding on that, there are a few things that would help those around those with ADHD.

For Chronic Fatigue Syndrome (CFS), we have the spoon theory to indicate energy levels and activity throughout the day. I have something analogous to this, the John McLean Theory for ADHD.

What do I mean by this?

For those that haven't seen Die Hard, John McLean is the hero cop in the series, and he gets the job done. Specifically, in Die Hard II, it's about getting the control tower back online and working.

However, it can be a bit hit and miss when it comes to those with ADHD and their control tower.

Even with medication, people have different experiences; the timing of doses, general mood, sleep, stress, and other life factors significantly impact people, regardless of their underlying physiology.

With ADHD and medication, things can be a bit interesting. Some days even with medication, you want to stay in bed and probably should, though to other days where it's more MC Hammer and You Can't Touch This!

So what's this theory?

For an ADHD'er, spoons are dull and not that analogous to what you want to measure. Die Hard II being the analogy, it makes sense, to an ADHD brain, that we talk in John McLean's

So how does this work?

For those with ADHD, you have a way of expressing how good or bad your overall feeling is concerning your focus, fatigue and likely productivity.

If it's crap, do something that isn't going to be self-destructive. If you're on fire, find something you have been putting off or is more complex and get that done.

Why is this needed?

Prioritisation and urgency are two traits that are often lacking with those that have ADHD. They need to have external factors that they listen to in accomplishing tasks. Especially so if those tasks are not part of their hyper-focus subject matter.

One thing that showed through with Covid here in New Zealand is the message to be kind in lockdown had a massive impact on those struggling with their mental health.

We found that mental health issues through lockdown were much lower than we anticipated. In some part due to people not having the external demands on them outside their home. Because they had to stay home.

More recently, though, we are seeing the impact of the longer-term stress that has come from Covid; this is presenting as an increased level of mental health conditions.

For me, here in my part of the world, an increased level of people with undiagnosed ADHD. Those that I can help with and make a difference in referring them to appropriate, compassionate clinical specialists.

We have research that suggests that 10% of the population has ADHD, and my observations indicate that this number is quite a bit higher.

I'll repeat, ADHD is not a behaviour issue; it is a brain issue. It's not poor parenting, or food, or whatever the theory is; it is a different brain that operates differently. It is not broken, and that needs to be heavily reinforced.

In the same way, you wouldn't ask a kid with a broken leg and no cast to run; telling an ADHD kid to focus is the same thing. That part of their brain doesn't work as well as others. And ADHD can be managed with specialist support. Not discipline, not growling, but with compassion and understanding.

Last year, 2020, the ministry of health reported an increase in kids diagnosed with ADHD. I'm not surprised; it has been under diagnosed for decades.

Interestingly, the MoH report shows the increase in females diagnosed; yes, this is a gender-neutral condition. However, for the girls, the social environment they have had imposed is different to the boys, which has meant that ADHD has been less apparent.

That increase for the girls, in those stats, was 126% more against the prior data. The media took the negative spin on that concerning the medication, which is horribly wrong.

The media view is like saying to someone with a broken leg you can't have a cast because you're not bleeding. Off you go.

As a community, we've done well with Covid, and the fallout and impacts from it, continue that theme; Be Kind.