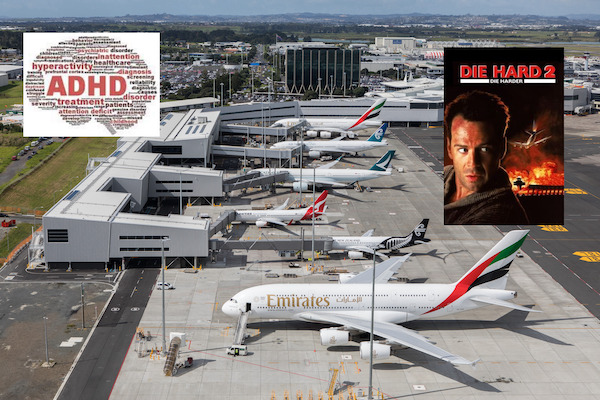 Having been involved with mental health disability claims for the better part of two decades, I've observed many things that those experiencing a disability due to mental health and clinicians on the coal face don't always appreciate.

A level of distance gives perspective. And one of the things I have noticed is that ADHD, attention deficit hyperactivity disorder, is far more common than people think.

And no, it's not a behaviour or parenting issue, quite the opposite. The majority of parents of kids with ADHD do significantly more to help their kids than those considered normal. There are lots of stereotypes and misconceptions. And I'm going to attempt to tidy a few up here.

Well, three years ago, I was diagnosed with ADHD. It was a surprise to me, as I had been the one that achieved and excelled and pretty much was the atypical stereotype of someone with ADHD. I was a boy, and that was about the extent of the assessments in my history.

Long story short, we came to this conclusion during the hunt for what turned out to be the piece of Lego in my lung; that's a long story you'll find elsewhere here.

And with that diagnosis came the somewhat surprising comments from those around me, both long term contacts and some a lot shorter in duration.

The consistent response was, "No **** Sherlock; I could have told you that, didn't you know?"

No, and you didn't tell me. So I was left to think I was a bit different but not understanding why.

Which is part of the reason I'm writing this now.

And to answer the lingering question, no, the insurance industry doesn't look favourably on ADHD because the history of the condition hasn't been good to insurers. Because they typically have to deal with mental health issues that come from the situations people find themselves in.

First, I need to say if you have ADHD, you are not broken; you are just made a bit different to the majority of the population. Like we get different skin colours, heights, freckles, eye colours, etc., brains develop differently.

So what does this have to do with Airports and Die Hard II?

Well, Die Hard II is the epitome of the world of someone with ADHD. Keep that in mind as I explain.

Most people understand how an airport works. You have the airport building itself; it has things like security, ticket management, check-in, baggage handling, toilets, cafe's, all that stuff needed to manage getting you on the plane.

The airport building is your subconscious brain. The place where stuff happens because it has to, but you essentially have no control over it.

Then we have the planes themselves. They have a purpose; they are going somewhere in a particular direction at a specific time.

This is your conscious mind, where your thoughts happen, and a lot is going on.

Then we have the control tower. Its job is to direct the planes, tell them where to go and when, and generally schedule things in an orderly way. This is the pre-frontal cortex of your brain. Where the executive function happens. This is also the area of the brain that doesn't work quite so well for those with ADHD.

Telling someone with ADHD to focus better, concentrate harder, be less distracted, and many other directives don't work.

Those who are what are called neurotypical generally don't get it. For those with ADHD the part of the brain that controls the functions of focus and concentration are broken. It does not matter how much you try; these attributes will not improve without serious intervention—usually medication.

So taking the approach of try harder and all the rest that goes with it does harm, especially if you are a kid with ADHD. It reinforces the failure self-perception and has a severe risk of creating the very mental health issues we all want to avoid.

But those same people we see not focused and distracted will demonstrate absolute focus at times so they can do it?

Yes, and no. What you are seeing with someone with ADHD is their superpower. Their hyper-focus. This is where they engage with something at the expense of everything around them. Some can regulate this others can not. Everyone is different.

It is where that brain has a particular flavour or thing it enjoys, feed it that, and it will stay focused. Introduce something else; if it's not their flavour, don't be surprised if it is ignored or not engaged with.

The classic is ADHD and housework. Yes, sure, everyone hates it. But an ADHD'r will avoid it like the plague as something else is always more interesting, and that's where the brain goes.

You will find people who love housework, which is in the ADHD community, too; the difference is they will be as neat as a pin.

Which leads into the anxiety piece. Mental health? Yes, but no.

Having had the opportunity to observe hundreds of people under stress with claims, the one thing that is very, very clear with those that have ADHD, that hasn't broken them completely, is they often exhibit a level of clinical anxiety, but they don't demonstrate a similar level of clinical depression.

However, my observations of those with ADHD where they have been caught or identified before they have serious mental health events suggest that they experience a level of anxiety, but they don't have the corresponding depression symptoms.

And this ties in as a general symptom of ADHD rather than the more commonly diagnosed General Anxiety Disorder, GAD, seen. This means that we potentially have many people in the community diagnosed with GAD being medicated for that but need further specialist assessment as they may have ADHD. Which treated appropriately will change their lives.

Yes, I'm not a clinician, but I have direct experience from many angles. I have been on a disability claim where fatigue was a significant component. The Lego story I mentioned earlier.

So how does this tie in with Die Hard II?

With the airport analogy I outlined above, Die Hard II is the epitome of a day in the life of someone with ADHD. It might explain why I enjoyed the movie so much.

It's Christmas, the airport is crazy, and a bunch of terrorists shut down the traffic control tower.

So we have a bunch of planes going places without any control, while on the ground all hell is breaking loose in directions unrelated to the aircraft: explosions, distractions, plot twists, surprising features and interesting ideas.

Everything except a lovely quiet, ordinary Christmas Eve visiting the family. Basically a bomb has gone off, and the control tower is blowing in the wind.

* Copywrite on the included images to their respective owners used for illustrative purposes.